A chronology of key events:

1206-63 - Following unification of the Mongol tribes, Genghis Khan launches a campaign of conquest. His sons and grandsons create the world's biggest land empire.

1727 - The Treaty of Kyakhta fixes the western border between the Russian and Manchu empires, confirming Qing dominion over Mongolia and Tuva.

1911 - The Qing dynasty falls and Outer Mongolia declares its independence. Russia and the Republic of China recognise its autonomy.

1937 - Mongolian Prime Minister Genden is arrested in the USSR and shot for spying for Japan. The Minister of War Marshal Demid is poisoned aboard a Trans-Siberian train. Monasteries are destroyed and lamas murdered.

1939 - Mongolian and Soviet troops commanded by General Zhukov defeat an invasion by Japanese and Manchukuo forces in the Battle of Halhyn Gol (Nomonhan).

1939 - "Mongolia's Stalin", interior minister and new Minister of War Choybalsan, is appointed prime minister. Ex-PM Amar is tried in the USSR and shot for spying for Japan.

1945-46 - Yalta conference agrees to preserve the status quo - Soviet control - in Mongolia. Mongolians vote for independence in a UN plebiscite. Mongolia is recognised by the Republic of China.

1949-55 - Relations established with the People's Republic of China. Railway built across Mongolia linking Russia and China.

1952 - Choybalsan dies, and is replaced as prime minister by Tsedenbal, the MPRP general secretary since 1940.

1984 - "Mongolia's Brezhnev", party General-Secretary Tsedenbal, head of state since 1974, is forced out of office by the MPRP Politburo.

1986 - Gorbachev's Vladivostok speech opens the way to detente with China and the withdrawal of Soviet troops from Mongolia.

1990 - Street demonstrations force resignation of the MPRP Politburo. Political parties are legalised. Elections to the Great Hural (parliament) are won by the MPRP, but 19 of the 50 seats in a new standing legislature go to non-communists.

1992 - Mongolia's new constitution gives first place to human rights and freedoms. In the first democratic elections the MPRP wins 71 of the 76 seats in the new single-chamber Great Hural.

2001: On the campaign trail with Bagabandi

1993 - The first direct presidential elections are won by Ochirbat, nominated by the National and Social Democrats.

1996 - The National and Social Democrats win 50 seats in the Great Hural elections, but the MPRP can deny a quorum, hindering passage of legislation.

2000 - After the democrats form three new governments in two years the MPRP wins 72 seats in the Great Hural elections. The National and Social Democrats and three other parties form a new Democratic Party.

2003 July - It is announced that 200 soldiers will be sent to Iraq to contribute to peacekeeping.

2005 March-April - Protesters in the capital demand the government's resignation and an end to poverty and official corruption.

2008 July - President Enkhbayar declares a state of emergency to quell riots in the capital which left five dead and hundreds injured. Violence erupted after the opposition accused the governing party of rigging elections.

If confirmed as prime minister he will replace Bayar Sanjaa, who asked to resign due to ill health.

Mr Batbold is reputedly one of the country's wealthiest men and is expected to continue the country's pursuit of investment in mining.

Mongolia, landlocked between Russia and China, is poor despite rich deposits of copper, gold, uranium, silver and oil.

The ruling Mongolian People's Revolutionary Party (MPRP) will submit Mr Batbold's nomination to President Elbegdorj Tsakhia, who is expected to give his approval in the next few days.

After that, the Mongolian parliament, called the State Great Khural, will vote on his confirmation.

Parliament had earlier approved the request of Mr Bayar to resign - he has suffered from hepatitis C and related liver problems and was hospitalised again last week.

He had recently overseen the signing of a long-debated deal between Mongolia and two mining companies - Rio Tinto and Ivanhoe Mines.
A mix of old and new buildings on the outskirts of Ulan Batur
The Mongolian government says economic development is a priority

This would see the development of a $4bn (£2.44bn) gold and copper mine, the Oyu Tolgoi mine in the Gobi Desert.

"I regret that I couldn't finish what I planned to do," Mr Bayar told lawmakers, according to state television.

"The government still has a lot of work to do," he said.

Mr Bayar became prime minister in November 2007 after assuming the leadership of the MPRP, which had ruled the country for decades as a one-party communist state until a peaceful move to multi-party politics in the 1990s.

He was confirmed in his post in September 2008, two months after riots erupted in the capital Ulan Bator over a disputed June parliamentary election victory by the MPRP. Five people were killed.

The MPRP still controls the 76-seat parliament, but Tsakhiagiin Elbegdorj of the opposition Democratic Party won the presidency in May, creating a virtual coalition government.

Mongolia's location, between Russia and China, has prompted feelings of vulnerability, requiring its leaders to carefully balance conflicting interests.

Mr Batbold was educated in Moscow and London.

Altai Trading, which has hotel and cashmere interests, is now being managed by Mr Batbold's wife.
at 02:04:00 No comments:

Politeness (1)
All foreign tourists have noticed that the Japanese people are very polite. Politeness is good if it shows sympathy for the feelings of other people. It should also show respect for social positions, which were originally due to actual merit, not birth. In its highest form politeness is close to love. Politeness is patient, kind, does not envy, does not praise itself, is not proud, behaves correctly and does not allow evil. One must know, however, the difference between true and false politeness.
When correct behavior became essential, it was natural that a system of eticquette should become popular. It was used to train young people how to bow, walk, sit and serve tea. Table manners became a science. Serving and drinking tea came to be a ceremony. A man of education was expected to master all of these things.
Some Europeans, however, have spoken badly about our etiquette. They say that we think about it too much and follow it too strictly. There may be some unnecessary points about ceremony. But is it any more foolish than strictly following the everchanging fashions of the West? I think even fashions are not foolish. They simply show that human beings are always looking for something beautiful. Even more so, I do not think that ceremony is completely unimportant.
at 19:48:00 No comments:

Email ThisBlogThis!Share to TwitterShare to FacebookShare to Pinterest
Labels: Бүшидо

Зарим компаниуд 5 дугаар сарын 1 –нийг амралтын өдөр болгодог бөгөөд энэ бол тавдугаар сарын өдөр болдог.
Golden Week
April 29th is Japan’s National holiday, Showa no hi. This day leads Japan into Golden Week, a succession of holidays. When Saturdays and Sundays are included, this week becomes one of the longest holidays of the year. The weather is warm and suitable for excursions at this time, therefore many Japanese make trips during Golden Week and it is one of the busiest travel times.
Showa no hi (Showa Day) April 29:
It used to be Emperor Showa’s birthday celebration. After his death in 1989, it was designated as “Midori ni hi (Greenery Day),” a day for appreciation of nature. It was decided to change the name of this day to “Showa no hi” as of 2007.
Kenpo kinenbi (Constitution Day) May 3:
The present Constitution of Japan was put into effect on this day in 1947.
Midori no hi (Greenery Day) May 4:
“Midori no his” used to be celebrated on April 29, until 2006. Before being declared “Midori no hi,” May 4 was a national holiday as it fails between two other holidays.
Kodomo no hi (Children’s Day) May 5:
A day to wish for the health and happiness of children.
Some companies give employees a day off on May 1, which is May Day.
at 03:12:00 No comments:

HAIKU
Haiku and senryu are forms of poetry. They each have seventeen syllables in three lines in a 5-7-5 pattern. Haiku contain words indicating the season (kigo). Haijin (haiku poets) often have pen names called haigo. One of the greatest haijing was Matsuo Basho who wrote many haiku while traveling. Many people still enjoy reading and writing haiku today, and newspapers often have columns full of haiku contributions.
Senry has the same form as haiku, but a different focus. Haiku is traditionally about the poet’s reaction to objects they encounter. Senryu, on the other hand, is about daily life and is often comical.
at 03:03:00 No comments:


Motherhood; All love begins and ends there.

The future starts today, not tomorrow.
Violence and arms can never resolve the problems of men.
Stupidity is also a gift of God, but one mustn't misuse it.
Freedom consists not in doing what we like, but in having the right to do what we ought.
Pope John Paul II 1920 оны 5 дугаар сарын 18 нд төрж, 2005 оны 4 дүгээр сарын 2 нд жанч халжээ.
at 02:00:00 No comments:

Life is half spent before we know what it is.

I like to be a free spirit. Some don't like it, but that's the way I am. Whoever is in distress can call me. I will come running wherever they are. 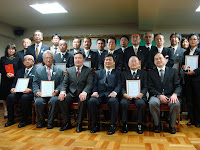 Email ThisBlogThis!Share to TwitterShare to FacebookShare to Pinterest
Labels: Мэдээ

Email ThisBlogThis!Share to TwitterShare to FacebookShare to Pinterest
Labels: САНАА 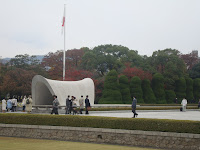 Email ThisBlogThis!Share to TwitterShare to FacebookShare to Pinterest
Labels: Тэмдэглэл

Email ThisBlogThis!Share to TwitterShare to FacebookShare to Pinterest
Labels: САНАА 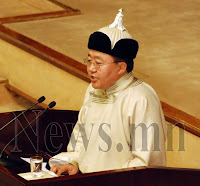 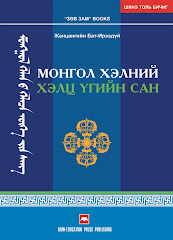 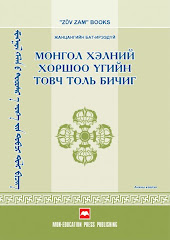 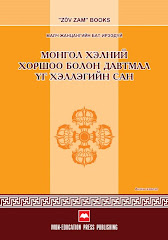 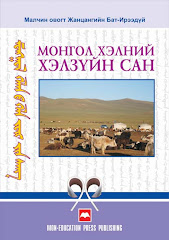 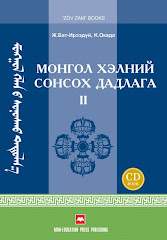 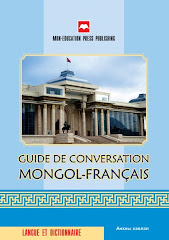 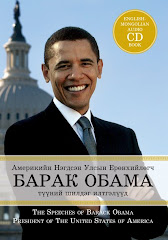 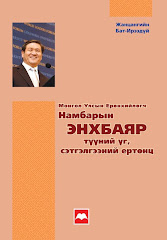 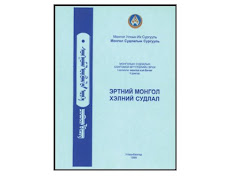 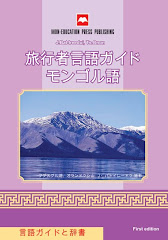 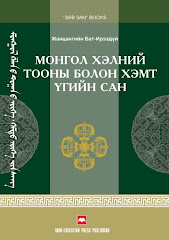 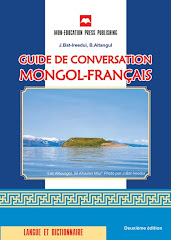 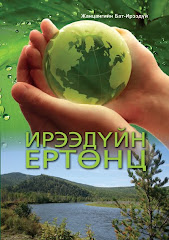 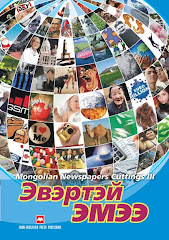 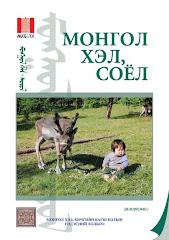 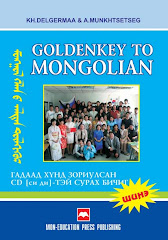 The book for foreign beginners, Edited by J.Bat-Ireedui, Price 30.00USD 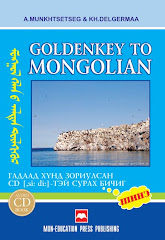 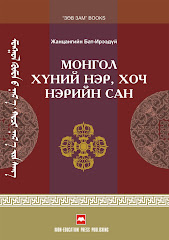 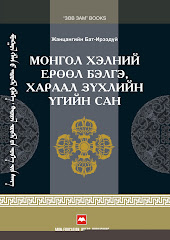 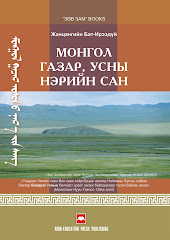 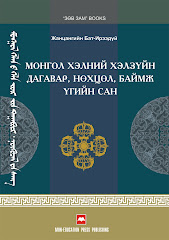 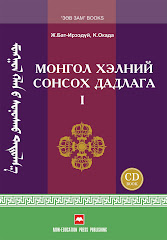